ASEAN And India: 25 Years And Beyond 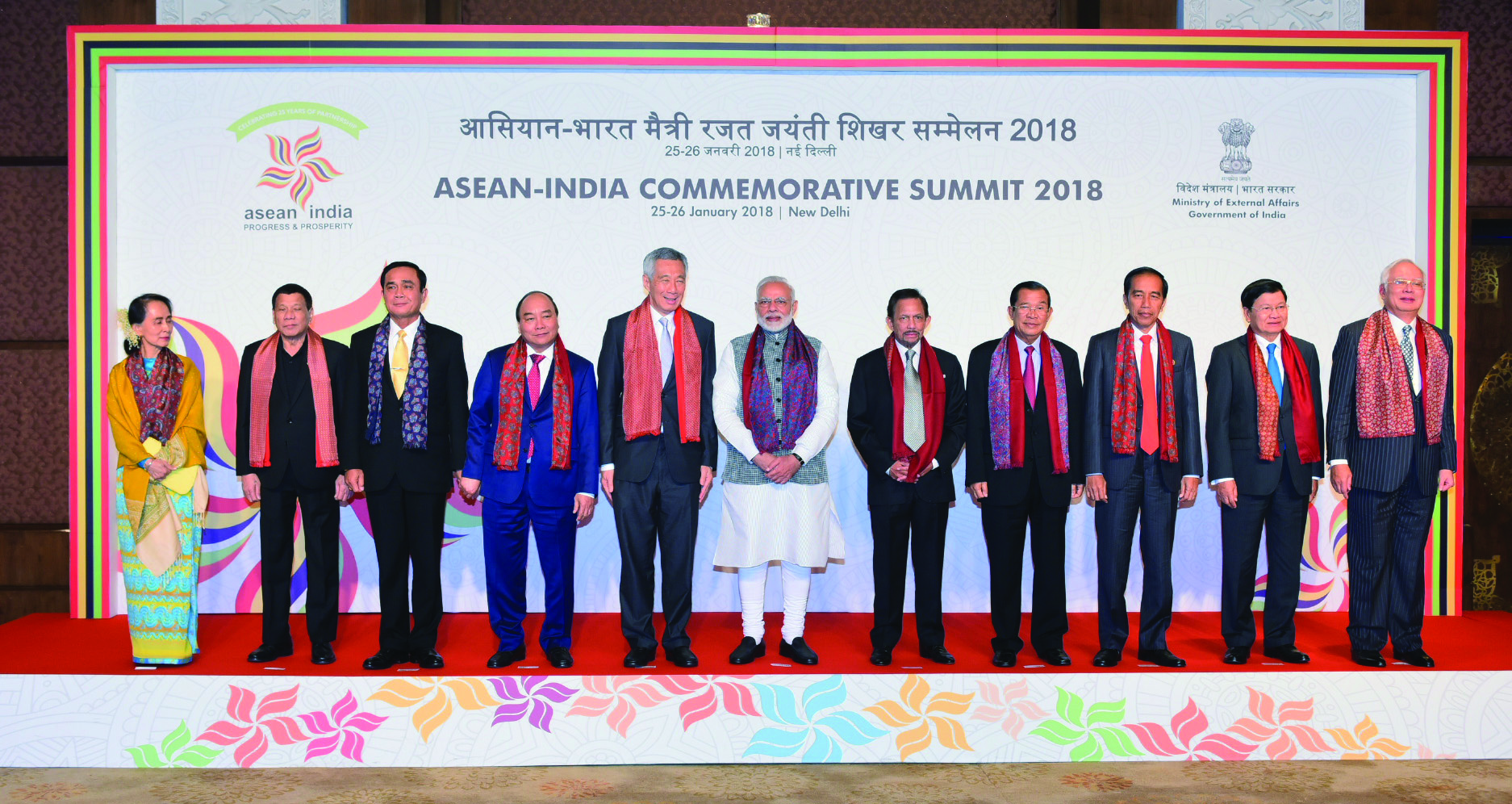 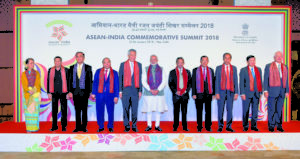 The Prime Minister, Shri Narendra Modi with the ASEAN Heads of State/Governments and ASEAN Secretary General, at the ASEAN India Commemorative Summit, in New Delhi on January 25, 2018.

While we commemorate 25 years of ASEAN-India relations, India’s ties with Southeast Asia date back more than 2,000 years. Ancient trade between India and countries such as Cambodia, Malaysia and Thailand is well-documented. Southeast Asian cultures, traditions and languages have been profoundly influenced by these early linkages. We see Indic Hindu-Buddhist influences in historical sites such as the Angkor Temple Complex near Siem Reap in Cambodia, the Borobudor and Prambanan temples near Yogyakarta in Indonesia, and the ancient candis in Kedah in Malaysia. The Ramayana is embedded in many Southeast Asian cultures, including in Indonesia, Myanmar and Thailand. Singapore’s Malay name is Singapura, derived from Sanskrit and meaning ‘lion city’.

Singapore has always advocated India’s inclusion in the ASEAN Community. India became an ASEAN Sectoral Dialogue Partner in 1992, a full ASEAN Dialogue Partner in 1995, and participated in the East Asia Summits (EAS) from 2005. The EAS is a key component of an open, inclusive and robust regional architecture, and the region’s main strategic Leaders-led forum.

ASEAN-India relations were further elevated to a strategic partnership in 2012, the 20th anniversary of ASEAN-India relations. Today, ASEAN and India enjoy multi-faceted cooperation across ASEAN’s political-security, economic and socio-cultural pillars. Prime Minister Narendra Modi’s ‘Act East’ policy and 3-C (Commerce, Connectivity, Culture) formula for strengthening engagement with ASEAN speaks to our broad-based cooperation. We have around 30 platforms for cooperation, including an annual Leaders’ Summit and seven Ministerial Dialogues. India has participated actively in ASEAN-led platforms including the ASEAN Regional Forum, the ASEAN Defence Ministers’ Meeting Plus, and the East Asia Summit.

With the ASEAN-India Free Trade Area (AIFTA), ASEAN-India trade has risen steadily from US$2.9 billion in 1993 to US$58.4 billion in 2016. On the socio-cultural front, programmes like the ASEAN-India Students Exchange Programmes and the annual Delhi Dialogue foster closer people-to-people relations. Through these platforms, our youth, academics and businessmen get to meet, learn and deepen ties.

To mark this Silver Jubilee of ASEAN-India relations, both sides have held many commemorative activities. The recent Pravasi Bharatiya Divas in Singapore recognised the contributions of the Indian diaspora. Today’s ASEAN-India Commemorative Summit marks the culmina¬tion of these celebrations. It is an honour for all the ASEAN Leaders to be in New Delhi for this occasion. ASEAN Leaders are also deeply honoured to be invited as Chief Guests at tomorrow’s 69th Republic Day Parade.

Major global trends are reshaping the strategic outlook, presenting both challenges and opportunities. The strategic balance is shifting. Demographic, cultural and political changes are underway in many parts of the world. The consensus on globalisation and free trade is fraying, but the Asian story continues to be a positive one. We need to push on with economic integration. We must also be resolute in dealing with emerging transboundary challenges, including terrorism, cybercrime and climate change.

This geopolitical uncertainty gives new impetus to ASEAN’s cooperation with key partners like India. ASEAN and India share common interests in peace and security in the region, and an open, balanced and inclusive regional architecture. India is located strategically along major sea-lanes from the Indian Ocean to the Pacific. These sea lanes are also vital trade routes for many ASEAN Member States. Both sides share an interest in preserving these vital maritime conduits of trade.

ASEAN and India’s combined population of 1.8 billion represents one quarter of the world’s population. Our combined GDP exceeds US$4.5 trillion. By 2025, India’s consumer market is expected to become the fifth largest in the world, while in Southeast Asia middle-class house-holds will double to 163 million. Both regions are also experiencing a demographic dividend – 60% of ASEAN’s population is below 35 years old, while India is projected to be the world’s youngest country with an average age of 29 by 2020. ASEAN and India also have fast-growing internet user bases, which will help us to grow the digital economy. Against this backdrop, we still have much scope to grow our ties – India accounted for only 2.6% of ASEAN’s external trade in 2016.

May I suggest three promising areas of mutually beneficial collaboration.

First, ASEAN and India should redouble efforts to promote trade and investment. We need to keep existing pathways up to date and relevant, including the AIFTA. We should work together to conclude a high quality Regional Comprehensive Economic Partnership (RCEP), surpassing the existing AIFTA. This would create an integrated Asian market comprising nearly half the world’s population and a third of the world’s GDP. Stream¬lining rules and regulations will stimulate investments in both directions, complement India’s ‘Act East’ policy and facilitate ‘Make in India’ exports to the region.

Second, our peoples will benefit greatly from greater land, air and maritime connectivity. We appreciate India’s efforts to improve land connectivity, including the extension of the trilateral India-Myanmar-Thailand Highway, and India’s US$1 billion line of credit to promote infrastructure connectivity with ASEAN. We look forward to working closely with India to boost our physical connectivity, including by expeditiously concluding the ASEAN-India Air Transport Agreement. This will enhance people-to-people flows across the region and help both Indian and ASEAN carriers to tap new and emerging markets, especially for business, investment and tourism.

Digital connectivity is another important area of cooperation, and can shape people-to-people connections for the future. India’s Aadhaar system creates many new opportunities, for instance, to harmonise our Fintech platforms or connect e-payment systems.

Finally, we continue to look for new synergies. One objective of Singapore’s Chairmanship is to develop an ASEAN Smart Cities Network, and here Singapore and India are natural partners. India is rapidly urbanising and has set itself a goal of establishing 100 Smart Cities. Singapore, an urbanised city-state, is ready to partner India on this journey and help develop urban solutions based on our own experience. Andhra Pradesh’s new capital city of Amaravati is one example.

As ASEAN Chair, Singapore is committed to deepening ASEAN-India ties. If both sides use our historical and cultural links to tackle today’s challenges and build bridges for the future, our youth and next generation stand to gain the most. 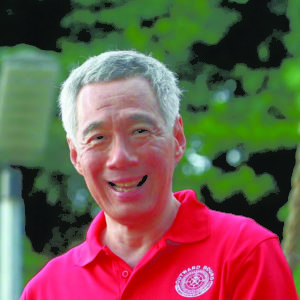