Pesticides helped bring modern farming to India. One tiny state is leading the charge to ban them. 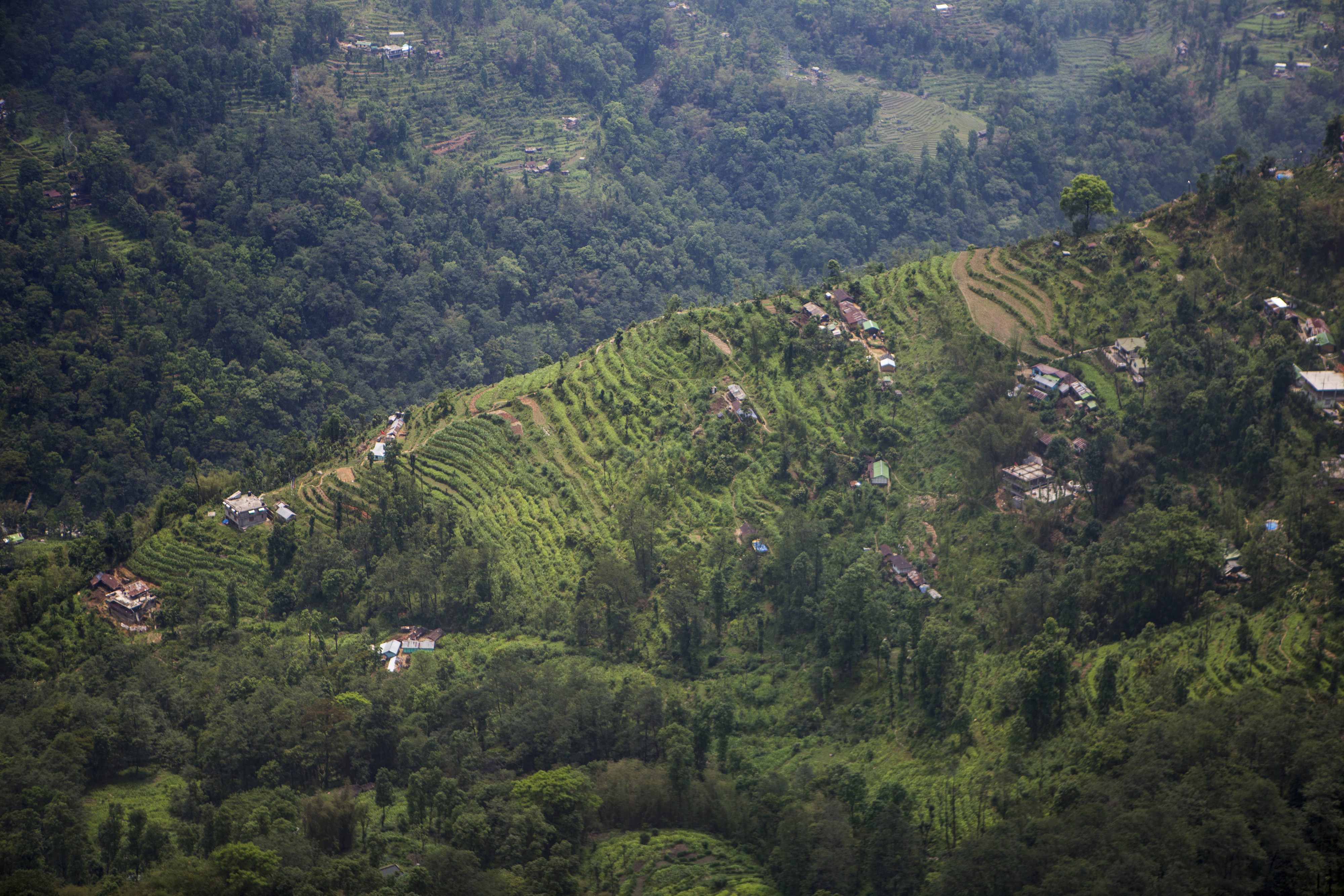 SORENG, India – Fifteen years ago, the tiny Indian state of Sikkim launched a radical experiment: Its leaders decided to phase out pesticides on every farm in the state, a move without precedent in India – and probably the world.

The change was especially significant for India, a country whose progress in agriculture was defined by the introduction of fertilizers and pesticides that rapidly boosted food production across the country, staving off famine and reducing the country’s reliance on foreign aid.

But with the indiscriminate use of pesticides came a spike in cancer rates in industrial farming areas. Rivers became polluted, and soil infertile. Sikkim’s leaders say they were driven to go all-organic by those concerns and because pesticide residue – including from some chemicals banned in other countries – was tainting fish, vegetables and rice.

The cloud-wreathed Himalayan state is starting to see the dividends. Overall health has increased in the state, leaders say, and Indian Prime Minister Narendra Modi’s government has embraced Sikkim and organic farming throughout India, pouring about $119 million to support organic farmers nationwide. India is betting that Sikkim can be the global model for other jurisdictions around the world that want to go all-organic.

In the years since the shift to organic, Sikkim has outlawed pesticides and chemical fertilizers, aided farmers in certifying about 190,000 acres of farmland as organic and on April 1 banned the import of many nonorganic vegetables from other states. The transition has not been always easy: Some farmers have complained that their crop yields have decreased and that they haven’t gotten enough support from the government.

Demand for organic food is high in India and growing fast. Concern about pesticides and desire for chemical-free food are fueling market growth that is rising 25 percent a year, more than the 16 percent globally, according to a recent study by the Associated Chambers of Commerce and Industry of India. The market for organic products is about $600 million now and could top $1 billion in the coming years, the study said.

“This is a big moment for India,” said Radha Mohan Singh, the country’s minister of agriculture and farmers’ welfare.

In a brightly colored tent in a mountain town one recent day, Sikkim’s chief minister, Pawan Kumar Chamling, exhorted 300 or so constituents in the audience to embrace the eco-friendly lifestyle.

“The approach Sikkim has started will be adopted by the whole world tomorrow,” he said, in a speech that stretched five hours. “This is our vision!” 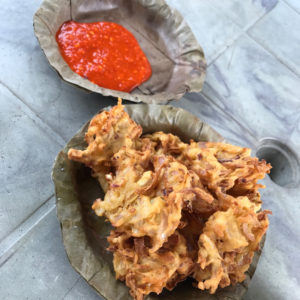 In the tiny Indian state of Sikkim, which banned disposable plastic plates in 2016, a spicy roadside snack of onion pakora comes on a disposable plate molded from leaves. MUST CREDIT: Washingotn Post photo by Annie Gowen.

Chamling, 67, has been the principal driver of Sikkim’s move to go all-organic since his state legislature set up the program in 2003. He’s largely self-educated, writes poetry in his spare time and is India’s longest-serving chief minister, in office since 1994.

“When we decided to go into organic farming in Sikkim, we faced so many challenges,” he said. “Agriculturists or cultivators had no idea what organic farming is, so education was our first priority. Slowly, people began to understand and supported us.”

But the executive order in March to ban the import of inorganic produce from neighboring states threw the state into turmoil, with prices of cabbage tripling in the markets, traders in revolt and the opposition party marching in protest.

Chamling dismissed these most recent events as “teething problems” and said he was confident the chaos would sort itself out. The state government is introducing seasonal price caps on organic vegetables for consumers to keep prices affordable.

There was no blueprint for change when Chamling began his efforts to preserve Sikkim’s fragile ecosystem, a land of hundreds of species of birds, wild orchids and glacier-fed streams, in the shadow of Kanchenjunga, the world’s third-tallest peak. The state – population 610,000 – nestles among China, Bhutan and Nepal and was a separate kingdom until it merged with India in 1975.

India has just begun formulating its policies for organic farming after its “Green Revolution,” during which the country adopted modern farming methods of high-yield seeds, chemical fertilizers and pesticides.

To encourage farmers to make the switch to organic, Sikkim tapered off its supply of chemical pesticides and fertilizers – making their use a criminal offense in 2014 – launched education programs, and installed thousands of composting pits. By 2016, 190,000 acres of cultivable land had been certified organic. The state has also banned the use of plasticware.

The transition, which took more than a decade, has not been easy. Some farmers say their income has decreased or have quit farming all together. One farmer, Pem Dorjee Sherpa, who grows potatoes and cardamom, said his income decreased dramatically since he switched to pesticide-free farming, and he complained that farmers need better access to markets, organic manure and training.

“The benefit of going organic has not reached us,” he said. 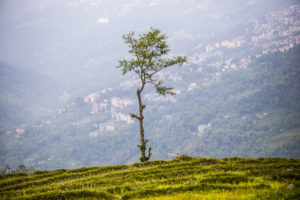 A tree grows on a hill as residential properties in Gangtok are seen in the background near an organic farm in Rumtek, India, on May 3, 2016. MUST CREDIT: Bloomberg photo by Prashanth Vishwanathan.

Sonam Taneja, the program manager for food safety and toxins at the Centre for Science and Environment, a research and advocacy organization in New Delhi, received similar feedback when she visited 16 farms across the state for a report that came out last year.

“The information I was getting was that farmers are struggling, fighting with pests, and yields are lower, and therefore they’re upset,” Taneja said. Productivity of most crops remained the same, except oranges, but the state will likely continue to have to rely on conventional produce from other states to feed itself, the study said.

In April, state officials opened two markets where farmers can sell their products directly to consumers and have added more than two dozen transport vehicles help them move their goods to markets more easily.

Officials say that the switch to all-organic has health benefits for Sikkimese, who are getting more nutritious food, and has rejuvenated the health of its soil as well as wildlife and dwindling bee populations. The country’s yield of large cardamom – dependent upon cross-pollination from bees – has increased more than 30 percent since 2014.

The country’s move to all-organic also has been a boon to its tourist industry, with a growing market for eco-tours and farm vacations. The Lonely Planet travel guide named it the world’s top destination in 2014, and the number of foreign visitors has more than doubled since 2011, the state’s tourism department says. As a consequence, tourism is a growing force behind the state’s gross domestic product, rising from 5 to nearly 8 percent by 2016-2017.

“It’s had a huge impact,” said Khorlo Bhutia, Sikkim’s secretary of horticulture and cash crop development. “It’s because of the good environment – chemical-free air, water, food – all these factors.”

Experts say that India’s organic product market has been driven by health-conscious, middle-class urbanites alarmed by the overuse of pesticides. But that’s changing. India is encouraging farmers to engage in a self-regulating organic certification process that is cheaper than outside consultants and will make organic food more accessible for the domestic market.

Choitresh Kumar Ganguly, an organic farmer from India who sits on board of the International Federation of Organic Agriculture Movements, said Sikkim can be a model for other states, such as Kerala and Meghalaya, that are planning to go all-organic. Sikkim’s neighbor, the kingdom of Bhutan, aspires to do so by 2020.

“Sikkim is of course way ahead, and their political will is much stronger than any other state,” Ganguly said. “They’ve done a good job. They did not use so many pesticides to begin with so it was easier for them to move out than it will be for many other states. Still, there’s huge awareness, and it’s growing slowly.” 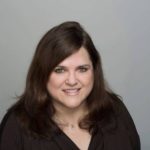