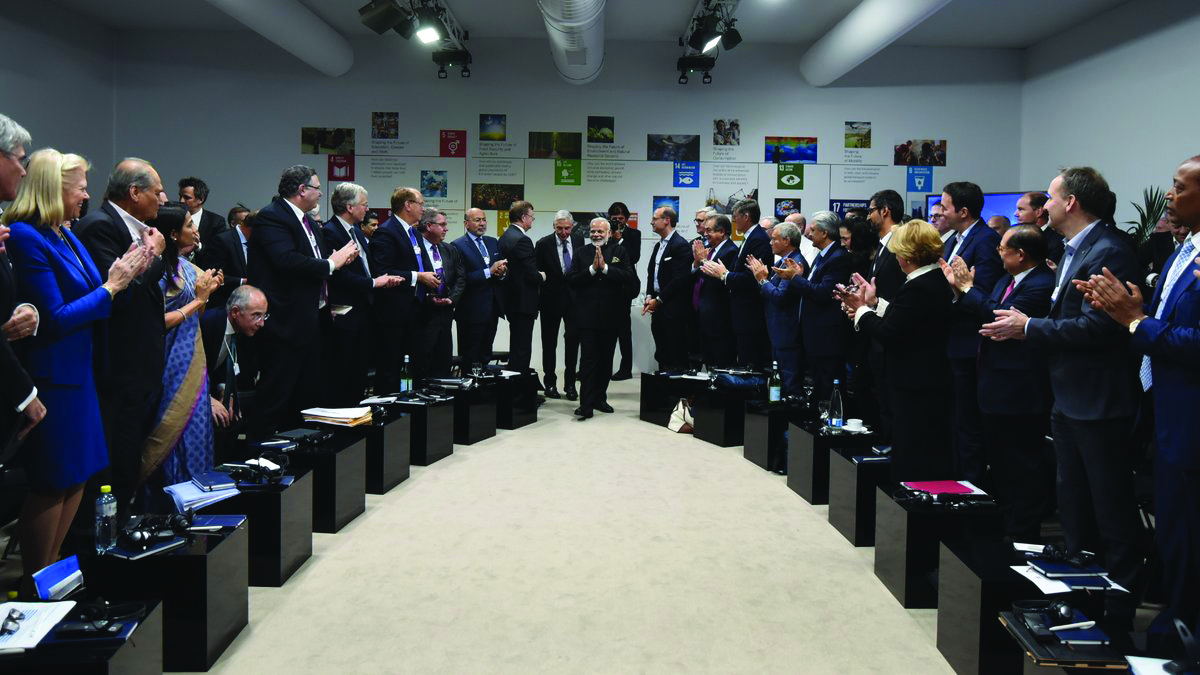 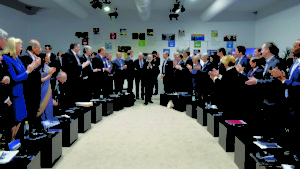 PM Narendra Modi at the International Business Council event. He spoke about India’s reform trajectory and how India is an ideal destination for investment.
Photo: Twitter/ @narendramodi

Appearing on the storied world economic stage in Davos, Switzerland, Modi staked out his role as a crusader for globalization, against protectionism and for tackling climate change. He held out the promise of a $5 trillion Indian economy by 2025, asserting the “License Raj” had been done away with and India is open for business.

During his whirlwind 24-hour visit to the World Economic Forum, Jan. 23, Modi also met several government and economic leaders. While experts and observers believe he did an effective job of pitching the opportunity of India, they differ on the impact of his Davos sojourn.

Taking up the WEF theme of Davos, Greeting a Shared Future in a Fractured World, Modi said at the international level, “the fractures and fault lines are really frightening.”

On climate change, he said, India is aware of its responsibilities , and “we are willing to take the lead in mitigating its effects.”

On international trade, he warned, “Instead of globalization, the power of protectionism is raising its head.” He also mourned the lack of consensus among nations. “We are seeing new types of tariff, non-tariff based barriers being imposed. Bilateral, multilateral negotiations appear to have come to a halt,” he noted. He urged countries to follow India’s philosophy of Vasudhaiva Kutumbakam, the world is one family.

It led to a telling headline in Bloomberg news which read, “Thanks to Trump, Meet the new leaders on global trade,” pointing to Modi and Canada’s Prime Minister Justin Trudeau, the first who spoke against protectionism and the other for women’s equality.

“It was a brilliant elevation of India’s profile on the world stage. It was very important that world leaders saw Modi’s brand of populism and nationalism, not seen before in Davos,” said Ron Somers, founder of India First Group in Washington, D.C. Modi’s message at Davos on opening borders, becoming more globally engaged, not looking inward, “is a forceful ‘Call to Action’ vociferously declaring that ‘India is Open for Business’ and is well-prepared to be the exemplar for other nations around the globe,” Somers asserted.

India is the ‘innovation backbone’ of every company in the U.S. and even Europe, Somers says. Proving his point was the presence of 3 Indian-origin business leaders out of the 15, who met President Donald Trump for dinner in Davos on Jan. 25. They represent multi nationals from three European countries: Rajeev Suri, CEO of Finland’s Nokia Corporation; Vas Narasimhan, CEO of Switzerland’s Novartis AG, and Punit Renjen, CEO of Britain’s Deloitte Global. 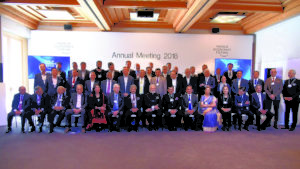 The first Indian head of government to address the world body in its 48 years, Modi led a huge government and business delegation to the WEF, reminiscent of the early 1990s, when India’s liberalization was taking off and its economic reforms were the talk of Davos. Since 1991 when economic liberalization was kick-started, the engine of India’s growth has been “unstoppable,” said Somers who lived in India in the 1990s. “I have just come back from India and I have never seen such a churning, economic boom before.”

Rick Rossow, the Wadhwani Chair and senior advisor on U.S.-India Policy Studies at the Center for Strategic and International Studies at Washington, D.C. praised Modi’s drive and accomplishments so far, but contended nothing new happened in Davos.

“The business community by and large, looking at the speech, didn’t see a lot of substance, any specifics on reforms as he had done before,” said Rossow, who used to be the director of the U.S.-India Business Council. “The big ideas have happened. The question is ‘what’s next on the docket?’ Davos was the opportunity to refresh the bucket.”

Rossow was also skeptical about Modi words against protectionism, saying India was one of the most protectionist countries in the world, a point Somers differed on.

“The reality is, it’s never been better. As a business person, I’ve never seen this ease of business before. Everyone I know who has come, has done well in India.” In addition, “The fact is, every state within India is progressing across all communities. If you sit in a rickshaw or a bus, you will see universal support for the leader,” he added.

Today, India is the fastest growing economy in the world projected to grow at the good clip of 7.4 percent of GDP annually by the International Monetary Fund.

Rossow said he would like to see India “take a real interest in integrating with the rest of the world,” even as Somers said Modi’s declarations in favor of globalization and against protectionism were seen favorably by American industry leaders like Jamie Dimon of JP Morgan Chase, and Lloyd Blankfein of Goldman Sachs. “They are celebrating that this populist leader is calling for globalization and raising people out of poverty around the globe,” Somers said.

Praising Modi’s “personal touch” and face time with foreign leaders and business executives, which were “great” as always, Rossow said the main concern going forward is that the United States “keeps trade concerns in one bucket and security concerns in another” visa-a-vis India.

News India Times publisher, Dr. Sudhir Parikh, recipient of India’s Padma Shri award, who recently announced the formation of the Parikh Foundation for India’s Global Development, said Modi opening the plenary session was a matter of great pride for India. “He told the world India is ready to be a world leader and that he is for globalization, and that India was open for business,” Parikh said. He pointed to the more attractive foreign direct investment regulations announced by New Delhi as proof of the continuing liberalization.

Contrasting him and Modi, Somers said, “Xi Jin Ping can say anything he wants but you can’t even use Google in China.” Even if Modi had just said ‘Namaste’ (at Davos), it would have been important, but he went further than that, Somers said. “… when a Prime Minister is able to call for globalization and free markets, when a leader says … let’s open our borders, let’s get more engaged, let’s not look inwards, it’s a declaration and call for action,” Somers reiterated.

After Modi’s meeting with the International Business Council, where Indian-American CEOS like Satya Nadella of Microsoft, were also present, the Indian Ministry of External Affairs tweeted Modi’s words – “the world applauds 1.3 billion people of India at the WEF in Davos, and appreciate the remarkable transformation in improving the business climate.” 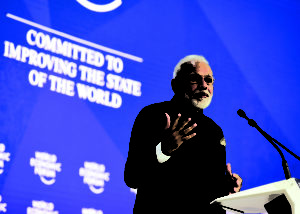 Some CEOs especially those from India, liked what they heard from Modi. Uday Kotak, managing director, Kotak Mahindra Bank, is quoted saying in Businesstoday.in that he was “enthused” by Modi’s position on protectionism. “His statement that we’re making the world narrow by going for protectionism, and that it is here that India will stand out was a big statement … . It was all about environment, call for inclusiveness, and anti-protectionism. So in essence he hit all the right buttons,” Kotak is quoted saying.

Mahindra Group Chairman Anand Mahindra, tweeted, “Every global CEO was floored by the personal touches in your hospitality. I am proud to be on the board of Invest India.”

Ajay Singh, chairman and managing director of SpiceJet, noted Modi had juxtaposed the wisdom of old India with the new India of digital, big data, and artificial intelligence.