India and Israel: Modi and Bibi are brothers in arms 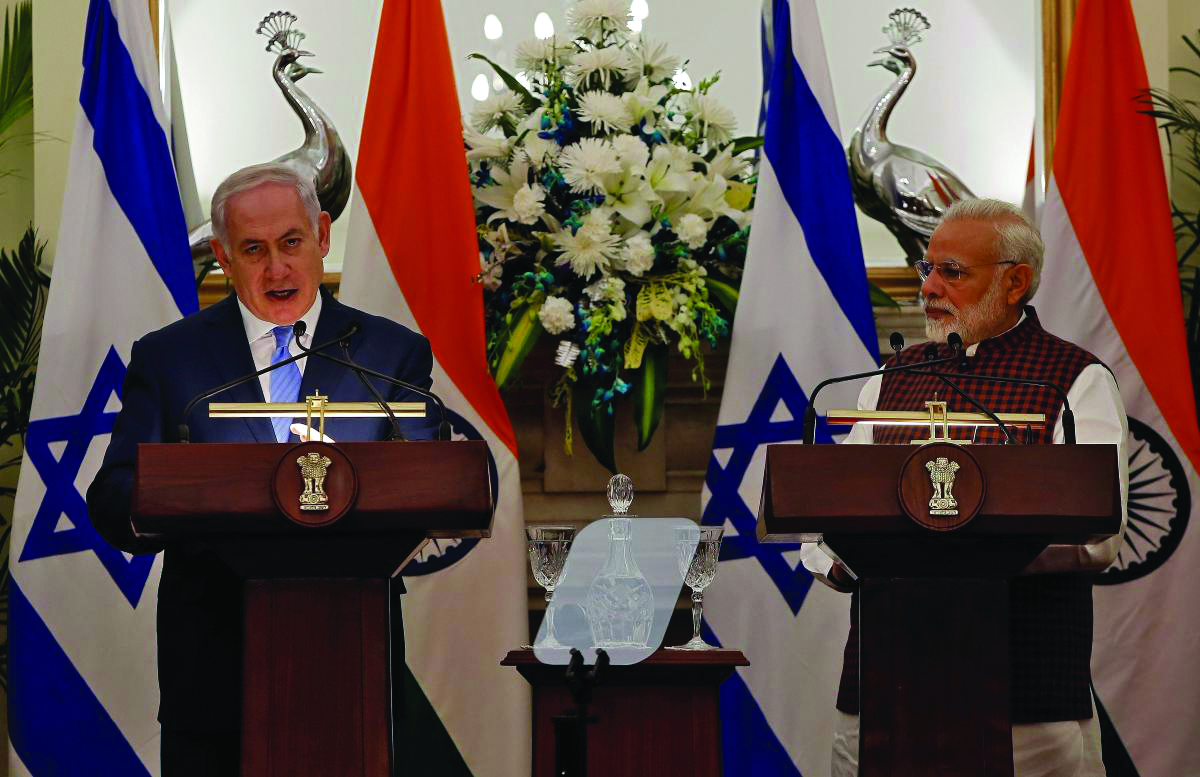 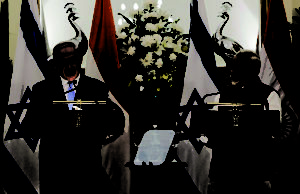 Israeli Prime Minister Benjamin Netanyahu made a historic visit to India last week – only the second time an Israeli prime minister has come to the country. It followed Narendra Modi’s momentous July 2017 visit to Israel, the first ever by an Indian prime minister. Israel and India were once ideological opponents; India did not recognize Israel for two years after its independence in 1948 and long viewed it with suspicion on the grounds that it was a religious ethnostate similar to Pakistan. The Cold War kept them diplomatically estranged, and it wasn’t until 1992 that they established full diplomatic relations. In the 26 years since, much has changed. Whereas ideological disagreements once seemed to keep the two countries at arm’s length, they now find themselves in an ever-closer embrace – and as last week’s events made clear, policy disagreements will not be permitted to stand in the way.

Nurtured by successive governments in both New Delhi and Jerusalem, bilateral ties have grown rapidly, driven largely by a rapid expansion of defense ties. Israel has supplied India with critical military equipment, including airborne early warning and control systems, drones, and border security solutions. India is now one of the largest customers for the Israeli defense industry, with an estimated $1 billion in annual defense deals, according to reports.

Indian policymakers tend to downplay the strategic aspects of the relationship. Whenever defense ministers are asked about Israeli defense ties in Parliament, the stock reply is that such information could not be revealed due to “national security considerations.” But there was nothing coy about Netanyahu’s visit.

The public display of warmth so evident during both Modi’s and Netanyahu’s visits highlights the massive stakes of the relationship in recent times. Israel continues to be a critical partner when it comes to fulfilling the modernization needs of India’s armed forces – essential to tackle looming external and internal threats. Israeli expertise spanning areas such as water, agriculture, and innovation is a perfect fit with India’s massive developmental agenda – and unlike the sensitivities that surround defense cooperation, there is nothing to hide when it comes to agriculture.

Israel’s success in cultivating robust and lucrative ties with a major regional powerhouse like India has also been a feather in the cap of successive Israeli governments. Given its location in a region surrounded by adversaries, Israel has invested efforts in developing new relationships with emerging powers in Asia and beyond. Netanyahu often highlights the fact that Israel has become an indispensable security and developmental partner for many countries worldwide. The countries also face a common enemy. The Israeli prime minister’s trip to the Chabad House in Mumbai (which was a target of Pakistani militants in November 2008) starkly reaffirmed the dangers posed to both countries by radical Islamists. The joint statement issued by the two governments on Jan. 15 advocated “strong measures against terrorists, terror organizations, those who sponsor, encourage or finance terrorism or provide sanctuary to terrorists and terror groups.”

But all of this bilateral bonhomie has obscured significant policy differences on some of the most contentious issues in the region. Netanyahu has expressed serious concerns about the efficacy of the July 2015 nuclear deal with Iran. Even prior to the negotiation of that deal, he has been a robust advocate of military strikes on Iran. The Indian Ministry of External Affairs opposed that approach and instead lent its support to diplomatic negotiations to address concerns emanating from Iran’s nuclear program. Indeed, at the height of the Iranian nuclear imbroglio, India’s oil imports and economic and defense cooperation with Iran were issues of major concern to Israeli ministers as well as Jewish-American advocacy groups.

Today, Netanyahu’s policy prescriptions vis-à-vis Iran continue to run counter to India’s economic and diplomatic priorities. His “fix it or nix it” strategy toward the Iran deal will not be acceptable to the Modi government, whose foremost concern is stability in India’s proximate neighborhood – home to millions of members of the Indian diaspora. India’s dependence on West Asian energy sources is all too obvious; for instance, India imported over $9 billion worth of Iranian oil during the 2016-2017 fiscal year, more than twice the amount imported the year before.

Iran is also an important conduit for Indian development aid to Afghanistan. The recent shipment of Indian wheat to that country via the Iranian port of Chabahar demonstrates the critical role Iran plays in India’s regional priorities. India’s deputy foreign minister, M.J. Akbar, recently referred to Pakistan as the “largest wall in history,” for blocking the transit of Indian goods to Afghanistan. It’s no surprise, then, that just a few days prior to Netanyahu’s visit, the Iranian transport minister was in India to sign deals worth $2 billion for the development of railways in Iran to enhance connectivity to Chabahar.

In many other situations, fundamental disagreements about a nation that one party sees as a sworn enemy might threaten to harm bilateral ties. After all, Netanyahu does not lose any opportunity in interactions with world leaders and on international platforms to paint the clerical “cult” ruling Tehran as dangerous for regional peace and stability. Yet with India and Israel, disagreements on Iran have not interrupted their increasingly close embrace.

Netanyahu did not bring up the Iranian threat in remarks at his joint press conference with Modi. And, in response to a specific question from an Indian journalist, a top Indian foreign ministry official said that while regional and multilateral issues were discussed, the Iran nuclear deal was not discussed “in any specific manner.”

Netanyahu seems to realize that India has its own interests and is unlikely to budge. After all, India’s position on the Iran deal is clear and well known. The Modi government welcomed the nuclear deal when it was negotiated and is wary of possible Israeli (or American) actions that could destabilize the Persian Gulf region further. India is not a member of the United Nations Security Council, nor is it a part of the group of interlocutors that negotiated the deal with Iran. The airing of the inadequacies of the deal to his Indian interlocutors would have been an exercise in futility for Netanyahu, simply because New Delhi does not have any power to influence the contours of the agreement. Harping on the deficits of the deal in India would have unnecessarily shifted the focus of his historic visit away from the burgeoning India-Israel partnership.

Iran is not the only area of diplomatic disagreement. India’s December 2017 vote in the United Nations General Assembly against the Donald Trump administration’s decision to move the U.S. Embassy from Tel Aviv to Jerusalem highlighted another stark policy difference between the two sides. But Modi and his government have successfully compartmentalized the issues. Most analysts agree that Modi’s visit to Israel (during which he did not visit Ramallah) effectively delinked India’s robust relationship with Israel from its continuing commitment to the Palestinian cause. In fact, on the last day of Netanyahu’s official engagements in Mumbai, reports surfaced of a possible Modi visit to Palestinian Authority President Mahmoud Abbas in Ramallah, as part of a trip that will take him to the United Arab Emirates and Oman in the coming months. By separating the two relationships and not letting Iran or Palestine stand in the way of warm ties with Israel, Modi has removed ideological considerations from the relationship and allowed India to be driven by its own economic and strategic priorities.

Netanyahu’s New Delhi visit and Modi’s trip to Israel reaffirmed the fact that India and Israel have managed to insulate what many see as a strategic “match made in heaven” from their divergent policy preferences. Unforeseen events on the ground like a war in Gaza or Iran could alter the equation and make India’s overt friendship with Israel an issue of intense domestic political contention (as it was during the most recent Gaza war, when the Modi government came under pressure in Parliament for refusing to condemn Israeli actions). But in the meantime, no such trouble appears on the horizon. Indeed, the energy and warmth that animated both the prime ministerial visits is poised to propel the partnership to new heights.