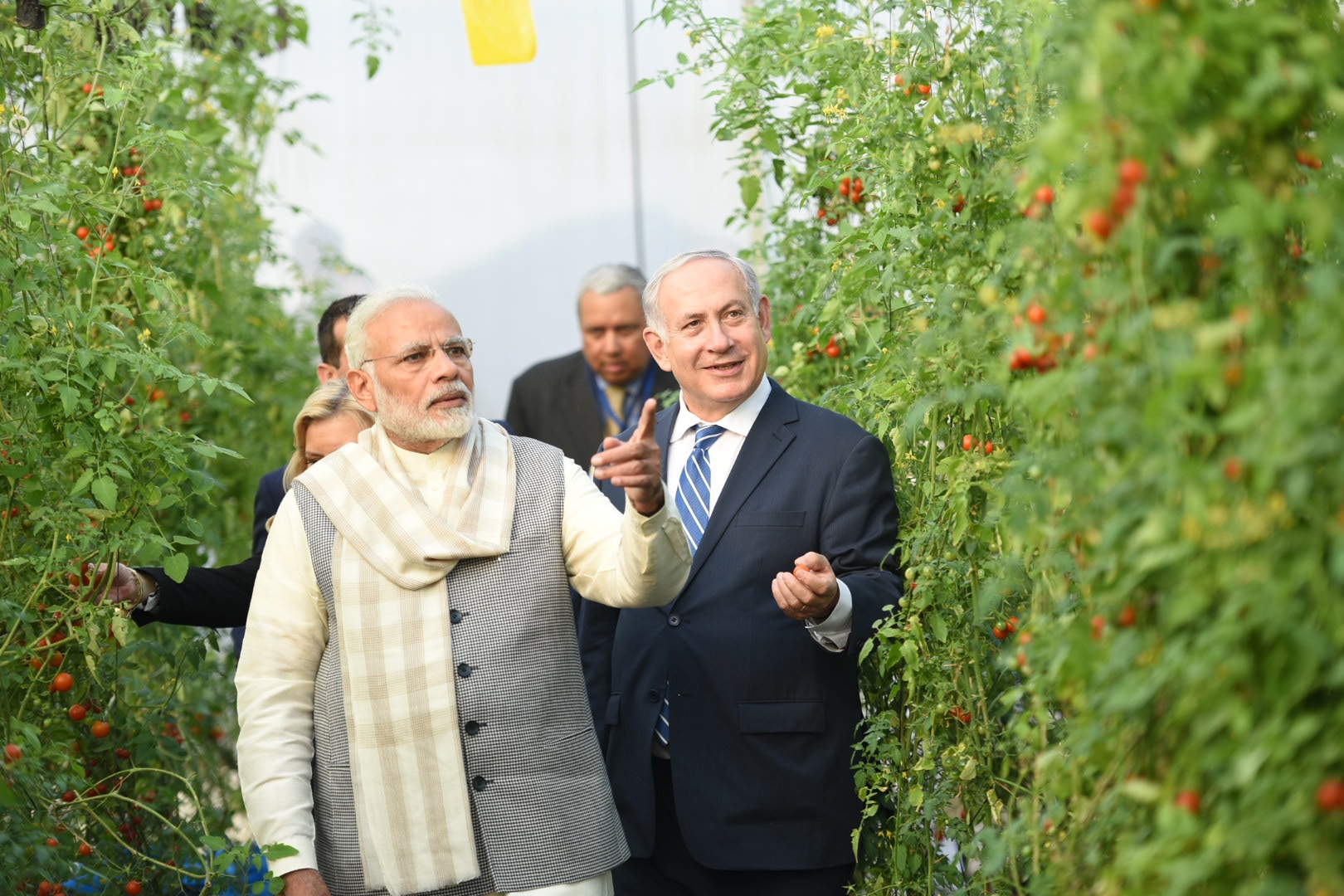 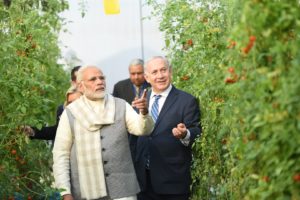 Vadrad: Prime Minister Narendra Modi and Israeli Prime Minister Benjamin Netanyahu during their visit to the Center of Excellence on Vegetables in Vadrad, Gujarat on Jan 17, 2018. (Photo: IANS/PIB)

GANDHINAGAR – The greetings from Israeli Prime Minister Benjamin Netanyahu, ‘Dhanyavad Mere Pyare Dost’ to Prime Minister Narendra Modi, and ‘Aliechem Shalom’ by Modi to his Israeli counterpart depicted the bonhomie between the two leaders during their visit to Gujarat on Jan. 17.

While Modi expressed his dream of achieving the goal of doubling farmers’ income by 2022 through Israeli technology, the Israeli Prime Minister hoped that under the able leadership of Modi, India would achieve that.

Both the leaders dedicated a centre of excellence for date farming at the Kukma centre in Kutch district through a digital switch, during their visit to the horticulture centre at Vadrad near Prantij. “Since the Biblical days, Israelis have been growing dates, wheat, and conventional produce. We have created new parameters in agriculture through scientific methods in a desert like Israel,” said Netanyahu.

He expressed his delight at knowing that the farmers could increase their output through the Vadrad centre of excellence formed with Israeli help. “India and Israel both believe in the policy of knowledge is the future. India has the vision and leadership under Modi,” said Netanyahu. Both leaders also unveiled the Memory Tower to mark 25 years of Indo-Israeli cooperation at the Vadrad centre.

“Israel shows the way on how to transform a nation with the agriculture sector at the core. As we work towards doubling farmers income by 2022, the factors such as optimum utilization of land resources, minimum wastage and understanding the needs of the market assume prime importance,” Modi said to the gathered audience of farmers, agriculture scientists and expert researchers.

Both the leaders expressed optimism of developing future technologies jointly by forging entrepreneurial alliances amongst youth, while they inaugurated the newly-built campus of International Centre for Entrepreneurship and Technology (iCreate) near Ahmedabad. The centre was formally dedicated to the nation by both the dignitaries.

An autonomous centre for start-ups, ‘iCreate’ was formally launched in 2011 when Modi was Gujarat Chief Minister. “I am delighted to be here. The world knows about iPads and iPods, there is one more i that the world needs to know about, that is iCreate. Israel wants to build partnership with you,” Netanyahu said before concluding his speech by chanting, “Jai Hind, Jai Bharat, Jai Israel.”

Narendra Modi said, “We are working towards making the entire system innovation-friendly, as intent leads to ideas, ideas to innovation and innovations would help form a New India. When I had visited Israel for the first time, I had decided that we should have relationship with this nation.”

The Israeli Prime Minister gifted the Gal-Mobile, a water desalination and purification vehicle, to India and both the Prime Ministers witnessed the demonstration of a vehicle that was stationed at Suigam, a village several kilometres away in the border district of Banaskantha, where BSF and villagers would benefit from clean drinking water using Gal-Mobile. The Gal-Mobile can purify around 20,000 liters of sea or salty water daily. The vehicle was dedicated by both the leaders through a video link.

The leaders began their one day visit to the state with host Prime Minister Modi and his Israeli counterpart embarking on an eight-km-long roadshow on their arrival in Ahmedabad, amidst heavy security blanket and thousands lined up to greet both. The leaders witnessed glimpses of India’s rich cultural heritage showcased at 50 stages erected alongside the route to Sabarmati Ashram.

Playing a perfect host at the Ashram, Modi showed his guest the possessions of Mahatma Gandhi. Netanyahu even tried his hand at Bapu’s ‘Charkha’ and after spending about 20 minutes at the Ashram, the Israeli Premier penned his thoughts, “An inspiring visit to the hearth of one of humanity’s great prophets of inspiration – Mahatma Gandhi.”

The leaders also experienced the thrill of the popular kite festival in Gujarat – Uttarayan – that was celebrated a couple of days ago by flying kites on the banks of the Sabarmati river. The Indian Prime Minister taught Netanyahu how to fly the kite.