Rhetoric and reality in the India-ASEAN relationship 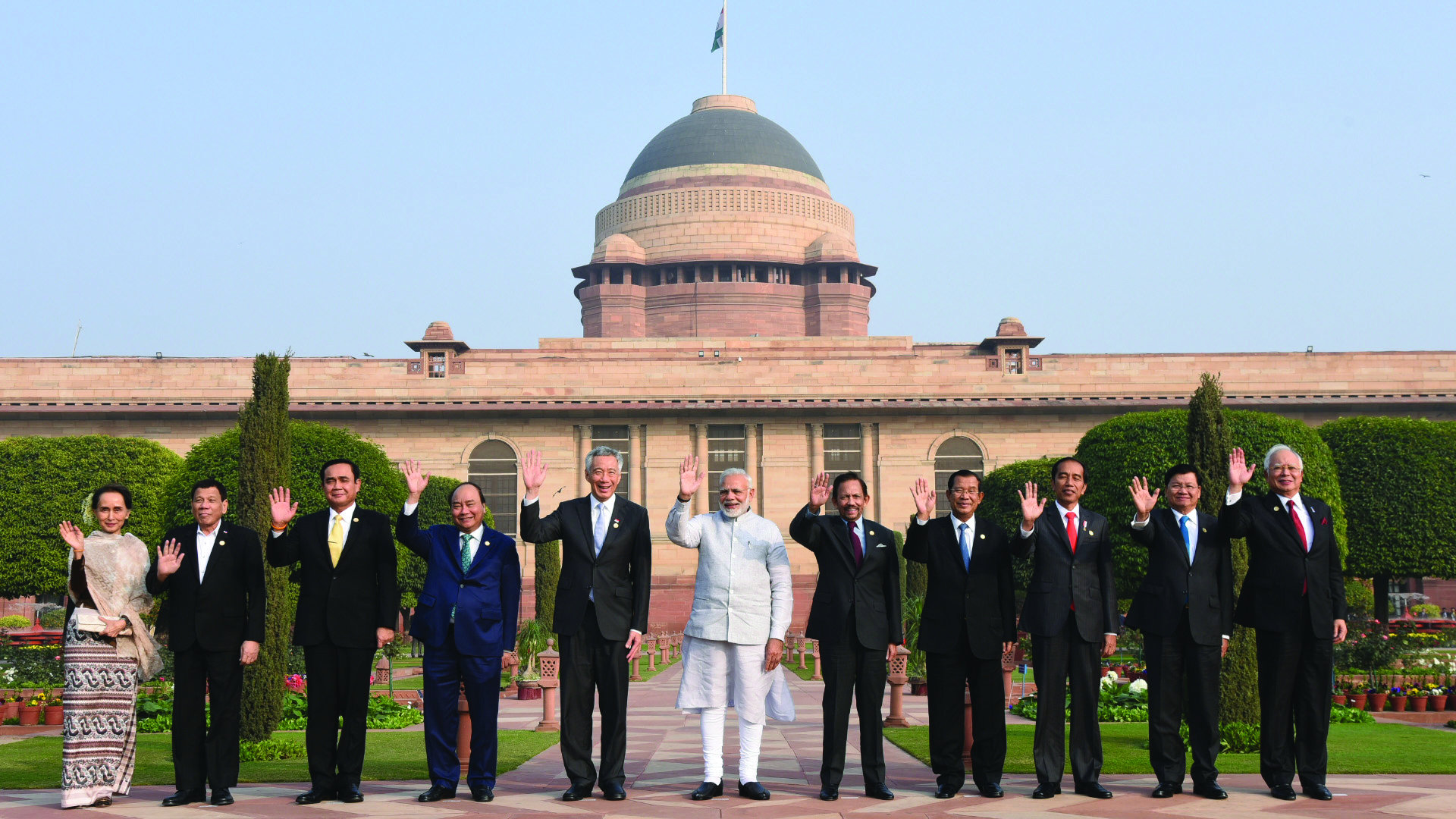 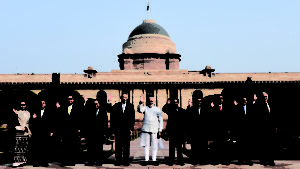 The Prime Minister, Shri Narendra Modi in a group photograph with the ASEAN Heads of State/Governments, at Rashtrapati Bhavan, in New Delhi on January 25, 2018.

India hosted leaders of the ten member-states of ASEAN (the Association of Southeast Asian Nations) as its chief guests during the commemoration of the country’s 69th Republic Day on January 26th. India’s vaunted ‘Look East’ Policy (renamed the ‘Act East’ Policy by the Narendra Modi government in 2014) is in its third decade with 2017 marking 25 years of dialogue partnership, 15 years of the summit-level relationship and 5 years of strategic partnership between India and ASEAN. These milestones were celebrated at the India-ASEAN Commemorative Summit that preceded India’s Republic Day. Under the banner of ‘Shared Values – Common Destiny’ there has been a focus on strengthening relations in the areas of commerce, connectivity and culture (the so-called “3 Cs”). This has entailed an increasingly multifaceted relationship with some 30 institutional mechanisms for dialogue between India and ASEAN.

India’s ‘Look East’/ ‘Act East’ Policy has come a long way despite being subject to several changes, both at the level of domestic politics and in the broader international system. At the level of domestic politics, several administrations have ruled the country since the launch of the policy in the early 1990s, ranging from the centre-left Indian National Congress (1991-96, 2004-2014) to the Hindu-nationalist BJP (Bharatiya Janata Party) (1998-2004, 2014-) and a plethora of weak coalition governments in the mid-1990s. However, despite their varying ideological orientations, all of these governments have continued to embrace the ‘Look East’ Policy and its central tenet of ‘ASEAN centrality’. At the broader geopolitical level, the collapse of the Soviet Union and foreign exchange crisis facing India in 1991 prompted the country to embrace economic liberalisation while reaching out to the dynamic ‘tiger’ economies of East Asia. This was followed by further changes to the structure of the regional order, marked by the rise of China as an increasingly prominent regional actor that became central to regional supply-chains and transnational production networks. However, despite these shifts, the policy has maintained the importance of Southeast Asia as part of India’s eastward engagement.

To be sure, the rhetoric of the ‘Look East’/ ‘Act East’ Policy has often seemed to be aspirational rather than reflecting the reality of India’s engagement with Southeast Asia. Even the vaunted revival of the ‘Look East’ Policy to the renamed ‘Act East’ Policy to symbolise a shift towards a more proactive and action-oriented approach towards the region faces criticisms of being a mere rebranding exercise. For instance, it remains to be seen if several aspects of the current so-called third phase of the ‘Look East’/ ‘Act East’ Policy under the Modi government – the first phase beginning under the government of Narasimha Rao in the early 1990s and the second phase being launched by the Atal Bihari Vajpayee government in the early 2000s – reach fruition. These include the Modi government’s focus on connectivity (including strengthening physical, digital, cultural and people-to-people contacts) and deepening institutional linkages, both through ASEAN-led forums (such as the ASEAN Regional Forum, East Asia Summit, and ASEAN Defence Ministers Meeting Plus) and beyond ASEAN, through the growing web of mini-lateral or trilateral linkages (e.g. US-Japan-India), sub-regional groupings (such as BIMSTEC (Bay of Bengal Initiative for Multi-Sectoral Technical and Economic Cooperation)) and the recently revived Quadrilateral Initiative or “arc” of democratic states (comprising the US, India, Japan and Australia).

Moreover, the success of the policy is to a large extent contingent on internal economic reforms that will dictate the pace at which India further integrates with the economies of Southeast Asia. Despite the government projecting a more investor-friendly image since its economic liberalisation in the early 1990s, India’s historically protectionist and conservative economic policies remain well entrenched. This is evidenced by recent claims that New Delhi is dragging its feet on the Regional Comprehensive Economic Partnership (RCEP), a multilateral free trade agreement comprising ASEAN, India and five other regional powers.

Moreover, chronic problems of bureaucratic inertia and inter-ministerial coordination remain barriers to accelerating infrastructure connectivity. The clearest example of this is the rhetoric of building up the country’s northeast as a land-bridge linking India and Southeast Asia. However, this cannot be realised until there is a further improvement in the infrastructure and security environment in the region. This is highlighted by the delay in completing two key infrastructure projects – the India-Myanmar-Thailand Trilateral Highway Project and the Kaladan Multi-Modal Transit Transport Project linking India’s Mizoram state with Myanmar’ Sittwe port. The state government of Assam organised a Global Investors’ Summit in February, which aims to re-emphasize the importance of the northeast to the India-ASEAN relationship and blur the longstanding (and some would argue artificial) divide between the South Asia and Southeast Asia.

The slow pace of infrastructure connectivity has in turn accounted for the relatively slow growth in India’s trade with ASEAN when compared to other regional powers, such as China, Japan and South Korea. While ASEAN is India’s fourth-largest trading partner and India is ASEAN’s seventh-largest trading partner, India’s trade with Southeast Asia notably lags behind much smaller economies such as Hong Kong and Taiwan, although India maintains ambitions to boost its trade with the region from under $80bn at present to over $200bn by 2022.

The ‘Act East’ Policy has also been “crowded out” to some extent by an increasingly bold and assertive foreign policy by other regional powers. This includes China’s ‘Belt and Road’ (‘21st Century Maritime Silk Road’ and ‘Silk Road Economic Belt’) initiatives; the United States’ strategic “Pivot” or “Rebalance” towards Asia under the erstwhile Obama administration and renewed efforts by Japan to engage with the region through the “Expanded Partnership for Quality Infrastructure”. To be sure, some of these initiatives have served to complement India’s ‘Act East’ Policy, such as the recently launched India-Japan ‘Asia-Africa Growth Corridor’ and the Trump administration’s efforts to consolidate the Indo-Pacific as the region’s strategic geography, which serves to further embed India in the regional architecture.

Nonetheless, these deficiencies do not diminish the importance of the ‘Look East/ ‘Act East’ Policy. India’s interaction with Southeast Asia has grown in leaps and bounds since the launch of the policy in the early 1990s. From short-lived Indian ambitions to forge an “Eastern Federation” of nations in Asia in the 1940s and 1950s, benign neglect took over in the 1960s and 1970s as India became preoccupied with instabilities and development concerns in its own neighbourhood (particularly in the aftermath of the war with China in 1962). The India-ASEAN relationship then underwent rapid deterioration in the late 1970s and 1980s amid concerns over India’s support for Vietnam following its invasion of Kampuchea (Cambodia) in 1978 and subsequent recognition of the Heng Samrin regime in Phnom Penh in 1980. This was exacerbated by regional fears over the implications of an alleged India-Soviet-Vietnam axis and India’s naval modernisation efforts. However, since the launch of the ‘Look East’ Policy in the early 1990s, the perception of India as a threat to regional stability has not only dissipated but instead been replaced by a view of the country as a stabilising force in the region. In other words, from viewing India as a distant and disconnected power, India is now seen as an integral participant in the regional architecture (albeit one that is the least significant of the major powers in the region).

Moreover, when compared to other regions in its extended neighbourhood, it is evident that India’s engagement with Southeast Asia has achieved a level of maturity not seen elsewhere. India’s other regional engagement policies (such as the ‘Connect Central Asia’ Policy (launched in 2012) or ‘Look West’ Policy (unveiled in 2005) and oriented towards the Middle East) were launched long after the ‘Look East’ Policy. Moreover, there have been limits in India’s level of integration with other regions due to geographic barriers (such as Pakistan preventing overland access to Central Asia) or geopolitical barriers (such as chronic instabilities in the Middle East overlaid by rivalries between regional powers (Iran-Saudi Arabia) and external powers (US-Russia).

Thus, when benchmarked against other major powers in the region, India’s level of interaction with ASEAN still remains modest. However, when judged on its own merits (both relative to its interaction with other regions in India’s extended neighbourhood and India’s historical interaction with Southeast Asia), India’s eastward engagement has gained significant substance and momentum over the three decades since the launch of the ‘Look East’/ ‘Act East’ Policy. 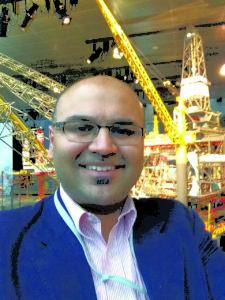 Chietigj Bajpaee is research scholar working on Sino-Indian Relations and India’s ‘Look East’ policy at the War Department of King’s College, London. He has worked with several political risk consultancies and public policy think-tanks, including the International Security Program at the Center for Strategic and International Studies in Washington and the Defence Analysis and South Asia programs at the London-based International Institute for Strategic Studies.