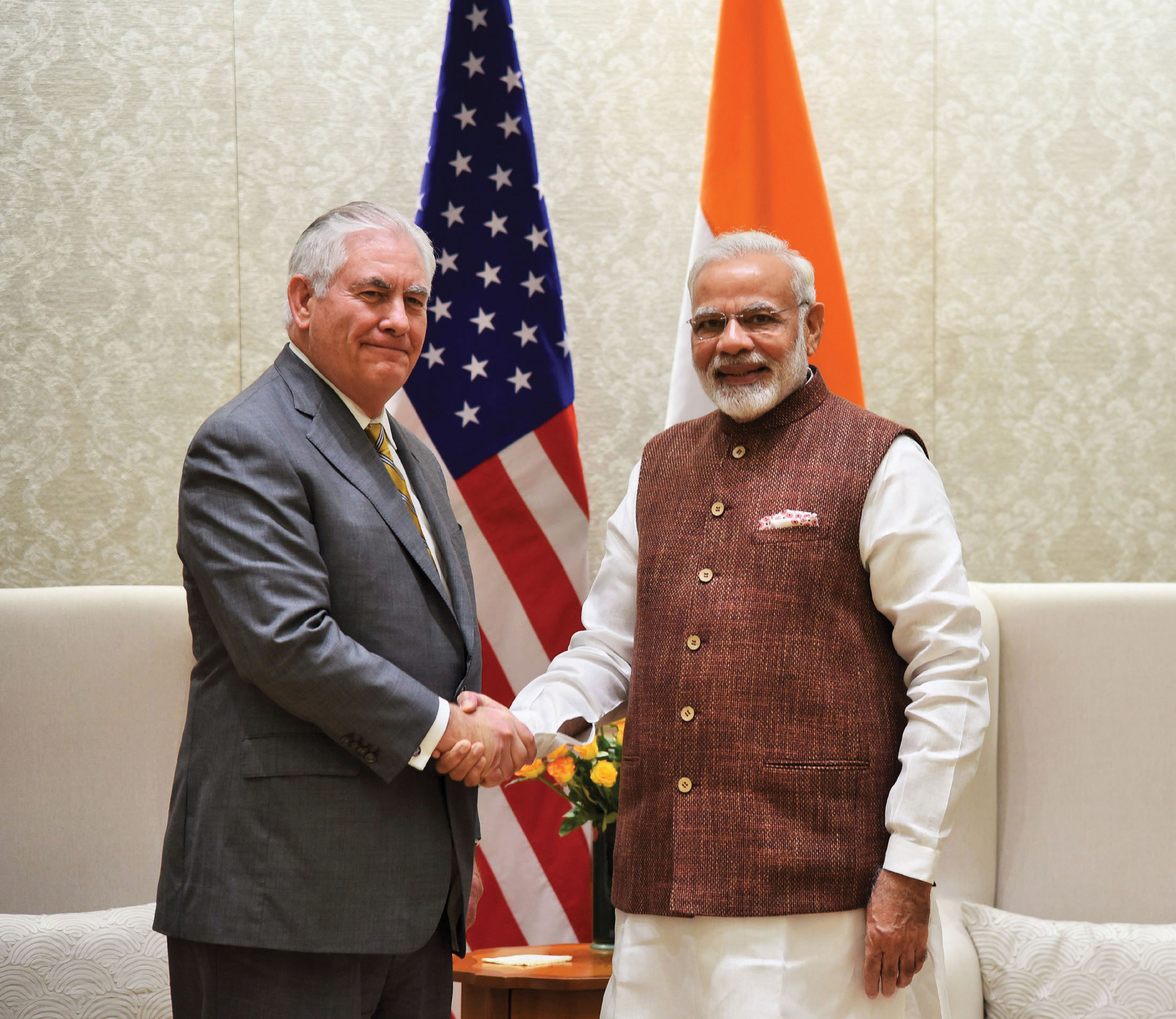 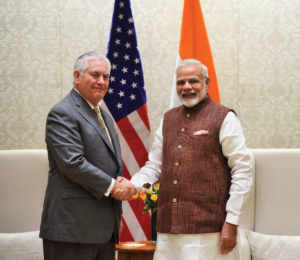 The US Secretary of State, Mr. Rex Tillerson calls on the Prime Minister, Shri Narendra Modi, in New Delhi on October 25, 2017.

Having raised India’s role to that of an anchor of Pax Democratiam – the comity of democratic nations – United States Secretary of State Rex Tillerson has hinted after his October visit to India and Pakistan that Washington is looking for a mediating role, one that could help New Delhi be rid of the weight the continuing conflict with Islamabad imposes on reaching its full potential. Despite their best intentions, this is an unrealistic optimism also expressed earlier by President Donald Trump himself and his United Nations Permanent Representative Nikki Haley – a road paved with failures by three of Trump’s four immediate predecessors.

On his way back, Tillerson said in Geneva on October 26 that while meeting Pakistani leaders in Islamabad, “I made the observation to them, ‘You have two very troubled borders. You have one in Afghanistan, you have one with India,’ and that we’re willing to help on both of those borders, and we’re not just here to talk about the situation on the Afghan border. We’re also here to talk about how can we lower the tensions on the border with India.”

He was not asked – and he did not say – if he had made a similar offer to Indian leaders.

During his campaign for the presidency, Trump had said, “I would love to be the mediator or arbitrator.” But he carefully prefaced it with the caveat, “If they wanted me to.”

In April, Haley, who has cabinet rank, said about India-Pakistan tensions, “I would expect that the administration is going to be in talks and try and find its place to be a part of that because it’s concerned about the situation.” And heightening expectations, she added, “And also wouldn’t be surprised if the president participates as well.”

But there are three important blocks to the US, the United Nations or anyone else mediating between the two neighbours.

First and the most is India’s intractable opposition to any mediation, which it views as unwelcome interference in the region.

New Delhi brandishes the 1972 Simla Agreement between Prime Ministers Indira Gandhi of India and Zulfikar Ali Bhutto of Pakistan to strenuously oppose any third party involvement in disputes with Islamabad. In that pact signed after the Bangladesh War, the two neighbours agreed to settle disputes only by themselves, although Pakistan has since sought to involve others.

Then there is the Pakistani military and the weight of history. Kashmir, which India considers an integral and immutable part of India, is the core issue for which there can be no solution without the agreement of Pakistani military establishment, which hold the ultimate power, to any compromises. The generals are bolstered by sentiments drenched by 70 years of history.

Keeping the Kashmir issue boiling – despite failing to get any active diplomatic support for its cause from anywhere in years – is the very source of the military-Islamic complex’s power. Dragging the US or others is but the Islamabad establishment strategy to try to weaken India’s resolve – a ploy New Delhi understands.

And there is China, which would like to keep the tensions at a slow burn precisely to limit India’s role in an American partnership, especially in the Indo-Pacific region – from India to Japan and onwards – that Washington has proposed.

The last – and perhaps the only – third party mediation was in 1966 when Soviet Prime Minister Alexei Kosygin brought Prime Minister Lal Bahadur Shastri of India and Pakistani Preisdent Ayub Khan to Tashkent after the 1965 war. They signed the Takshent Declaration that was to be the framework for peace, undertaking to improve relations between the neighbours, not to interfere in each other’s internal affairs. But it unravelled in five years with the Bangladesh War.

There were two US involvements in India-Pakistan affairs with beneficial results that did not rise to the to the level of a mediation and they could have lessons for any US initiative.
In 1990, former President George H.W. Bush – the “senior” – defused a mounting tension between India and Pakistan, which the US feared could lead to Islamabad using nuclear weapons. He sent his Deputy National Security Adviser Robert Gates to talk to then Pakistani President Ghulam Ishaq Khan and military chief Gen. Mirza Aslam Beg. (Prime Minister Benazir Bhutto had been sidelined by them and was out of the picture even though she had promised a “thousand-year war.”)

Gates is reported to have wrenched an assurance from the Pakistani leaders that they would shut down training camps for militants in their territory and conveyed it to the Indian leadership. That combined with an assurance to Pakistanis that US military attaches observed a winding down of Indian military buildup led to the de-escalation of the situation.

However, Gates, who later became President Barack Obama’s defence secretary, did not try to mediate broader issues like Kashmir that the Pakistanis wanted him to.

Bill Clinton, who succeeded the senior Bush, started off on the wrong foot when his Assistant Secretary of State Robin Raphael in 1993 landed the US in the Kashmir policy swamp.

She declared, “We view Kashmir as a disputed territory. We do not recognise that instrument of accession (signed by Maharaja Hari Singh) as meaning that Kashmir is forevermore an integral part of India.” (In 2014, Raphael was investigated by US authorities for alleged illegal dealings with Pakistan and had her security clearance revoked. Two years later, the investigations ended without any charges brought against her.)

But during the Kargil crisis of 1999, Clinton stepped in and arm-twisted Pakistan into withdrawing from the territories it had captured. Although, Prime Minister Nawaz Sharif was the one subjected to a diplomatic third-degree by Clinton, it was the military-Islamic complex that he was targeting.

The takeaway from both these instances is that the US can play a limited role in a crisis – or when it appears there’s one brewing – and has to realise this.

It has to set its ambitions low. The very next year in 2000, Clinton pitched for a role in the neighbours’ dispute, saying, “I think the United States should be more involved there, even though I think they’ll have to work out this business of Kashmir between themselves.” He was roundly rebuffed by India.

And, Washington has to work on the Pakistani military establishment to stop threatening military buildups, cross-border terrorism and any armed intervention.

Right now, Trump and Tillerson have delivered Pakistan a strong message about ending support for terrorism – an ultimatum of sorts. In Islamabad Tillerson met not only the civilian leaders, but the real center of power, Chief of Army Staff Gen. Qamar Javed Bajwa and Director General of Inter-Services Intelligence Lt. Gen. Naveed Mukhtar.

Tillerson later said that the Pakistani’s “have their concerns along their border with India” and added what may be a sop to Pakistan, “There are legitimate concerns on both sides of that border as well.”

Regardless of what it considers “legitimate concerns,” a US decreed end to terrorism and cross-border attacks – if they happen – won’t lead to a mediating role for Washington, but they could of themselves lead to a resumption of the India-Pakistan dialogue, which ended after a promising start in 2014. And that would further US interests.

The US can have a role in crisis management, while also being a discreet conduit for information.

Condoleeza Rice as his National Security Adviser in 2002 rejected Pakistani President Pervez Musharraf’s pleas for mediation. “The USA is always prepared to help in any way but we don’t believe this is something that mediation or facilitation is going to help,” said Rice, who later became the secretary of state.

Barack Obama, who succeded him had the grandest plan of all. In an interview during 2008 election campaign he told an interviewer that he had talked to Bill Clinton about becoming his mediator on Kashmir. But reality hit when he assumed office, as any great plans for a foray into India’s touchy terrain of Kashmir. 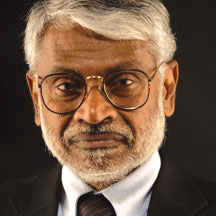 Published by special arrangement with the Society for Policy Studies, of which the author is a New York-based
non-resident senior fellow. He can be reached at arullouis@spsindia.in.